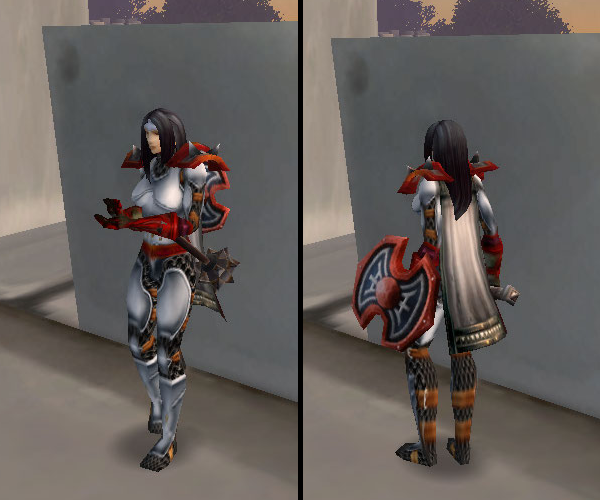 Status: Finished
To Find: Nothing

Thoughts: Nothing real creative here, but I had to do it.  I love the Overlord’s Set, as it’s simple, effective, shiny and even plausible.  Unfortunately, I never have been able to afford the price it typically commands on the WRA AH; the legplates and greaves were lucky strikes obtained when someone put them up but didn’t see the lack of a critical zero.  (Nobody cares about the itty bitty unimpressive crown, so that at least was cheap!)

Somehow, luck struck again, though this time in the form of Kum’isha the Collector.  He is usually not my friend, as he complains about every imperfect Draenethyst ever and has a thing for giving me Basilisk Bones, which don’t even vendor well, that bleepity bleep!  But the other day, he gave Nir the Overlord’s Chestplate, and Nir was overjoyed.  It was transmog time!

She insisted on using the Darksoul Shoulders still, as souls were sold to get ’em.  You’ve got to get your soul’s worth with these things, you know?  The Zaxxis Gloves are a quest reward; I’d prefer the Bloodforged Gauntlets as they’re a more solid red, but the price on those is ridiculous and I can only sell my soul for so many future reincarnations before I start having second thoughts.