After I picked all my crops, I realized that something was wrong at Sunsong Ranch … none of the untilled soil was Occupied by virmen.

No.  Occupied.  Soil.  None whatsoever.

I am positive they are planning some sort of terrible attack. 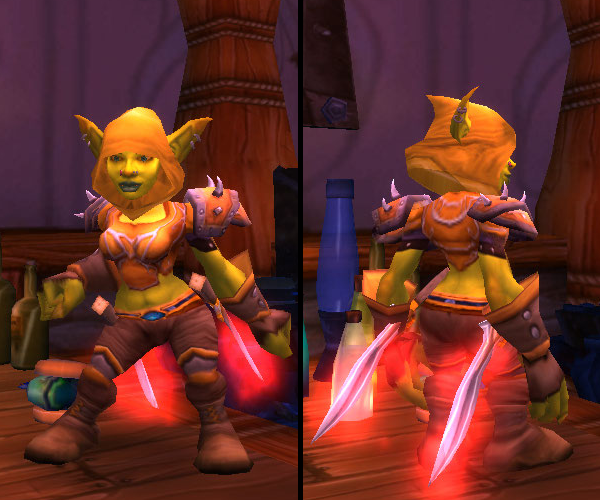 “Sunny Side Up” Set

Thoughts: This time around, the competition’s theme is “Spring,” more in the sense of “lots of horse races with crazy fashion and champagne yaaaay” than in the season itself.  This contest was more baffling to me than trying to turn a goblin into a druid.  At first I went “the bigger the better” route when it came to hat brims and totally went with cloth (the Vicious Fireweave hat is enormous, amirite?), but I couldn’t cook up a set that I actually liked.  I tried smaller hats.  I looked at turbans.  I gave mail a shot.  I pulled the chest pieces that I have never matched with anything out of Void Storage, hoping for some inspiration, but nothing struck me.

Finally, I changed my approach.  I said, “I should aim for ‘obnoxious.’  How can I, Prinnie, fail to come up with something obnoxious?  I can’t!”

Thus, Bombelina got a second chance to represent the goblins because she wanted to wear something crazy – for a rogue, that is.  You see, while wearing all black gives rogues a +5 to sneakiness, she was tired of that.  EVERYBODY wears black, and that’s boring!  Bombelina wanted a happy, perky rogue-inating outfit that better represented her overall personality.

I didn’t want her to wear white mostly because I have a sneaking suspicion that as a color, white is designed to attract trouble, tomato sauce and any beverage that isn’t water.  As a rogue whose main purpose in life is to open up boxes (while looking ADORBS!), Bombelina doesn’t need any more trouble than she can handle – which isn’t much trouble to begin with.  So what color do I go with?  YELLOW.  Yellow isn’t just happy.  Yellow is HAPPY.

I apparently won by virtue of there being zero competition!  As a goblin at heart, I’m totally cool with easy victories – and there was no bribery, blackmail or explosives involved!  Yay!

Thoughts: I almost called this the “Packrat” outfit, but then I decided that SRS LOOK deserves SRS NAME.  Thermalix has been holding onto those shoulders for awhile, never quite sure what to do with them.  She’s also been holding onto the helm (“but what if I want to wear it sometime?”), the chest piece (“It’s a memento of all the times I suffered as a really ugly night elf”) and the belt (“Ok, so I totally don’t remember where I got it”).

I’ve been debating questing for the Malefactor’s Eyepatch, which would match and have the added bonus of showing Therm’s cute hairdo, but for the time being Thermalix seems to be enjoying running around looking kinda eeeeevil.

Might I Suggest a Name Change
Looking for Raid is not accurate.

In my first attempt at LFR, I got a troll.  No, not that troll you see in the screenshot as the last man standing, but one of those “Wow, I’ve read about them, but I didn’t really think anybody could be that much of an asshole” type trolls.  Ironically, the guy was a healer.

I don’t get it.  Trolling LFR isn’t like taking candy from a baby.  This is because trollolololers have a fouler vocabulary than candy thieves do, and at least you get some real damn candy when you take it from a baby.  When there’s a troll in your LFR group, it’s more like Goldshire, but with less sexytimes and at higher levels.

What sick, sadistic designer came up with the Serpent’s Spine quest chain for the Golden Lotus?  No, seriously, what the hell was wrong with that dood?

Let’s take Mantid Under Fire as the first example.  You’re supposed to go find a vat of boiling oil on the top of the wall and use it to hurl oil (and a torch, for extra fire) on the mantid at the foot of the gate.  Sounds good, right?  I believe the NPC who gave it to me actually called it fun!  It took me a little while to figure out when I had actually successfully oiled up a bunch of mantid (otherwise you will hurl the torch to no avail and everything – and I do mean everything – will magically evade you), but I was doing all right – until the game decided I apparently took too long in killing my 80 mantid. 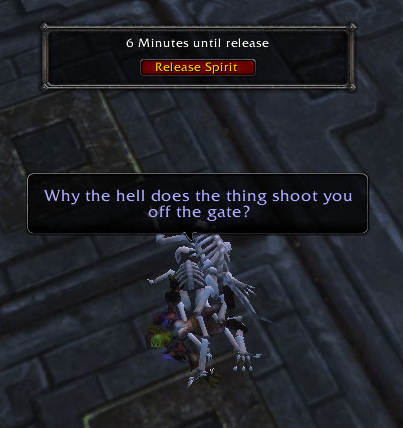 Stunned but Not Silent
I wish I had a shot of me in mid-plummet, but I was too startled the first time and too mad the second.

Why, in the name of Gawd, does the pot of oil insist upon ejecting you off the wall to your doom if you are unfortunate enough to take too much time to complete the quest?  I understand not wanting defenders (such as we are) to go AFK while manning one of the oil cauldrons when somebody else could use it, but why must I die without warning when I’m honest to Gawd using the thing and trying to complete the quest?

And why, in the name of Gawd, does the pot of oil insist upon throwing you off the gate to your doom if you click the authentic, legitimate “Leave Vehicle” button?  Why won’t it just let me step off to the side?  Why won’t the thing be satisfied unless it can hurl me off the wall to my demise, far, far below?

This was the first time I had gotten the quest chain.  Based on the comments I have subsequently read, you need to have the ability to see into the future to survive your first try.  With your psychic abilities, you will be aware of the violent tendencies of these pots to attack those manning them, and will wisely choose one of the pots on the ramparts where the wall is really thick.  That way, when the thing sends you flying – and it will – at least you don’t plunge to your certain death.

Nice one, whoever designed this quest.  Nice one.  You were angry or maybe a little upset at the time.  Maybe somebody said something awful on the forums, which they do a lot.  But why do we all have to suffer for it?

And while I’m at it, Along the Serpent’s Spine has caused me to hate the Shado-pan and the Golden Lotus in ways I never did before.  I’ve been told that the spawn rate in Mists is somehow smarter in that it magically increases when there are more people in the area killing the mobs in question, and decreases when there are less souls to do the work.  I think my friends who believe this are total fools.  They are also total dears and in many cases very experienced players, but they are fools for believing in this nonetheless.  Leaving fatty goatsteaks quest in the Valley aside, this quest proves it.

I was the only player in my immediate area, yet the spawn rate for the mantid on the wall was so Utterly Insane, my pet got utterly smashed to pieces and I had to Feign Death at a quarter health.  Thank God Feign Death lasts for up to six minutes so I could take a moment to wonder how the hell I was going to get out of there alive, since there was no one else killing these mobs in my vicinity and I was definitely still in aggro range.

All the while, the Shado-pan pandaninjas were running around the wall like chickens with their heads cut off.  Are they jogging to lose weight?  Are they hallucinating, seeing mantid in the distance that don’t exist?  THE SHADO-PAN, THEY DO NOTHING.

One of my tankytype guildmates (who, incidentially, ressed me earlier after one of my pot-of-oil-plummets) had to come help me out, because I would have aggroed without time to bandage up or drink a potion, which of course would have led to death.

Is this supposed to be realistic in the sense that OMG! THE PANDAS ARE BEING OVERRUN BY BUGS!?  If so, mission accomplished.  Objective achieved.  My conclusion is that the battle is utterly hopeless and pointless because even we big bad adventurers are going to get eaten alive by countless gigantic walking termites. Run away!

Realization
To be honest, this didn’t occur to me when he was small.

That Was an Accident!
Blog at WordPress.com.