ORBS ARE BAD
SO WAS THE TANK

The DPS queue for regular Pandaland dungeons is bad, man – it takes around thirty minutes on a good day, and you’re kinda effed should things not go over well (see: Exhibit A, above).  That party, for example, was a fatal mix where Nir and maybe one other DPS were attacking the orbs, the healer ran into the group of mobs by the bridge that the party had skipped, and the tank had little sense of positioning.  After we all wiped, the tank left and we requeued, only to get – you guessed it – the same damn tank, who then pulled the boss and dumped our asses.  Nir grabbed her sword and shield and tried to tank (as a retadin with no tanking gear!) while killing orbs, but … well, you see how that went.

So she spent most of her time questing.  I won’t lie, Niremere had one hell of a time in Pandaland regardless of the queue business – I don’t know if her gear sucked (probably), it was her spec (also likely, since she’s ret) or if she just had really bad luck (very possible), but sheeyit hurt bad.  Townlong Steppes and the bile-spewing, poisoning, mass-attacking mantid were very unforgiving (I have HOW MANY stacks of this bleeding debuff now!?), to the point where some of my Hordeside guildmates tried to help me out despite that whole language/faction barrier thing. 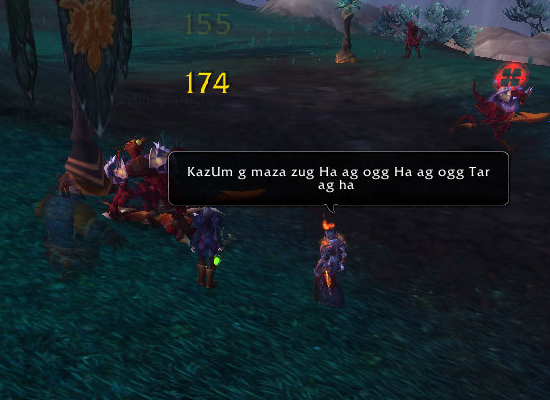 IMMEDIATELY after hitting 90, Niremere joined a Sha of Anger run … and somehow, she didn’t die during the whole thing.  WEIRD.

Double Dynamo
Thank you, thank you … I’ll be in my corner crying.

Now to work on her mining and blacksmithing, which are still back in the Lich King skill range.  Derp.