Ideal world: all people in the party respond to each other, thus coming to a pace that is acceptable to all.  Tank pulls faster than he or she was before, so the guilty puller stops pulling sheeyit when that’s the tank’s job.  Everybody learns their roles, gets to 90 and performs admirably in raids, instances and whatnot.

Real world: Tank pulls faster than he or she was before, but the guilty puller keeps on pulling sheeyit when that’s the tank’s job because he or she wants to go faster still and there is no consequence for not working at the pace others would prefer.  Tank quits tanking since DPS is going to tank anyway, healer develops psychological issues, DPS lols and says “I can [insert role here] better than you.”  Everybody ever QQs over LFD wait times and the jerks who ruin the community.

Or they just pull crap and dump the party.

Some of this stems from the LFD votekick, which is the only immediate and effective reprisal for idiocy.  Its mysterious inner workings seem to be something like this: if there’s a group where someone is disrupting the party equilibrium and/or getting everybody killed, I cannot kick him if the system deems me to be too votekick happy and/or if he’s already been kicked ninety million times and/or anybody is in combat which we probably are because the person pulls crap ahead of the party (which is probably why I wanted to kick him in the first place), and/or while there’s a loot roll going on for even the merest green which is made worse when said person is AFK and, you know, not rolling.

There may even be secret rules like, “You can’t kick Trollolololman on his aunt’s birthday” for all we know.  Also, if it takes like ten minutes to complete the dungeon but you can’t kick Jerkface for another fifteen minutes, you’ve just experienced the very definition of futility – that is, votekick has absolutey no useful result whatsofreakingever.

This is stupid.  It’s time for a new setup where we let people kick people – in essence, let people police themselves.

More Words Version Behind the Cut

I couldn’t dig up much in the way of official wordage on how the vote kick system in LFD works.  It seems fairly certain that the current setup assumes the player doing the kicking is the problem – not the person (or even the bot) who is causing trouble for the group as a whole.  In essence, it isn’t “protect the party from the person,” it’s “protect the person from the party.”  For example, WoWPedia and WoWwiki have copy/pasted quotes from blue posts dating to way old versions (3.whatever), such as this:

“Players using the Dungeon Finder who rarely vote to kick players from a group, or rarely abandon groups before a dungeon is complete, will find that the Vote Kick option will have no cooldown. For players who frequently abandon groups or vote to kick other players, the Vote Kick option will be kept on a cooldown. This functionality will adjust itself as a player’s behavior while using the Dungeon Finder changes.”

Note how it says nothing about the target player of the votekick doing annoying or deadly things. 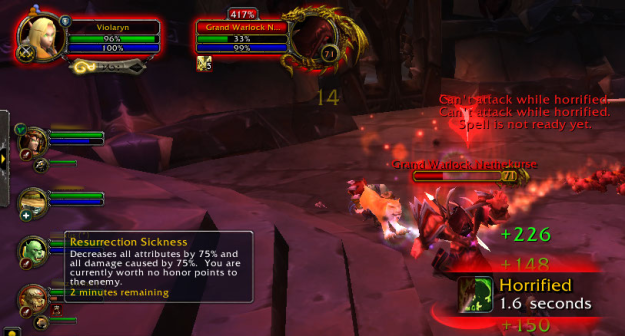 Yep I’m Horrified All Right
He had res sickness AND HE STILL PULLED. Wanting to kick this charmer is, apparently, a problem.

People have said to me that it’s set up this way to prevent trolls from abusing the system and kicking folks for no good reason other than the lolz.  Here’s the thing though – in every group I’ve been in (yes yes, the plural of anecdote isn’t data), the troll isn’t the person doing the kicking.  It’s the person being the pain in the tush because there is no consequence for acting like an impatient, inconsiderate asshat.  The target player can persist in obnoxious behavior as often as he damn well feels like it if he doesn’t get votekicked, because there’s no other way to get rid of him.  He can continue engaging in obnoxious behavior even if he DOES get votekicked because he won’t get Deserter status, which prevents you from queueing again for a half hour.

(And since when do LFD trollytypes from different realms actually work together to kick random players, anyway?  Am I missing some sort of nefarious conspiracy here?)

You know, I’m just gonna throw this out there: if one person initiates the kick and two others agree, then let the target player be kicked.  We’ve spent too long worrying over the players who get kicked for gearscore or low DPS. They aren’t penalized for being kicked and can queue again, inconvenient as it may be.  We need the power of looser votekick rules to deal with people who go AFK for long periods of time, cause the party harm or are jerks in general – there’s no other way to issue an ultimatum for that type of behavior.  Words won’t do it and social guilt won’t either, because this is LFD.  So let those folks get the boot.  They DESERVE to get kicked from parties.  Repeatedly if necessary.

A player cannot be kicked for x number of minutes or hours.

HOLY CRAP THAT’S INSANITY
He can’t be kicked for another FOUR HOURS.

I have seen times ranging from seconds to four hours.  If the delay remaining is under ten seconds, just let the player be kicked now.  Any wait period over five or even ten minutes is ridiculous given the speed at which most folks rocket through dungeons.  Any duration longer than the time needed to actually complete the dungeon is pointless – you can’t kick them, ever, no matter how badly they treat you or the party.  With the current setup, you can only leave (or abandon, whatever you’d like to call it) and get Deserter status for refusing to feed the trolls/get stressed out/play in a world where inconsiderate behavior is the norm.

Look, beating your head up against a brick wall does nothing to build community, protect people from trollish behavior or help people learn how to cooperate with each other.  It makes tanks quit and turns the rest into cynics who talk about how Barrens chat was better than Trade and woe the WoW community is a piece of crap nowadays RIP Vanilla forever.  I’d gladly take Deserter status over dying with every other pull, and I’m the sort of person who tries to teach huntards how to turn off Growl.

A player cannot be kicked during loot rolls.

This one is troublesome because it happens on any roll, even for crappy greens.  When I say crappy greens, I’m not even talking about gear that could be used for transmog – I’m talking about things like black diamonds from Blackrock, which are used for nothing unless you’re a jewelcrafter (and even then, only for a brief period while leveling up).  And yeah, those AFKers – when it comes to that oh so valuable black diamond (25 silver!), you have no choice but to wait until the loot roll times out on them, which is something like three minutes.  NOBODY is waiting for three minutes for this to happen, unless the ENTIRE party goes on a smoke break or something.  Nope, the rest of the party is going to barrel onwards, which leads to the next restriction:

A player cannot be kicked during combat.

Seems logical, right?  The thing is, dungeon dynamics have shifted.  It’s now all about the fast pulls, large pulls, AoE, go go go go you slowass tank.  If you get a group decked out in heirlooms, this mode of operation becomes even more apparent since you’ll also see the healer pulling crap when he or she is bored.  The time spent out of combat is minimal, and sometimes nonexistent (especially when Derp DPSer #1 feels the tank is pulling too slowly and/or not getting big enough groups and then decides to move things along).  When do you actually have a chance to kick someone?

In an ideal world, give and take would work this out here.  The tank would take the “hint” and increase the pace, thereby making everybody happy, right?  But there comes a point where the tank either does not want to or is incapable of increasing the pace further, for whatever reason that’s just as legit as Mr. Pullfaster’s desire to go faster.  Unfortunately, this type doesn’t cease pulling just because you ask – they persist in a behavior that’s annoying to tank/healer and possibly deadly.  In essence, they give no ground to the other members of the party who want to be a bit more chill.

So let people get kicked during combat.  If the group dies as a result of kicking said person, then that’s karma.  If they don’t and they’re happier for having done so, then the game experience has been improved for more people, and not just the one person now no longer present.

32 thoughts on “Vote Kicking in LFD”