This Will Never Do
Needs more lights, obviously.

The Dream
You know what I want?  I want a goblin-themed Garrison. 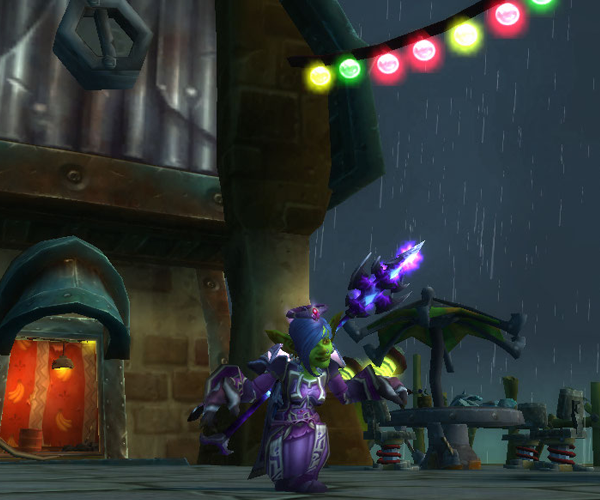 Should Look More like Sassy’s Place in Stranglethorn
Just ignore that it’s raining, and admit that it’s awesome.

So what if I’m in the Frostwolf area, surrounded by orcs and playing through a plotline filled with even more orcs ?  I’m the freaking commander of this joint, and I demand some STYLE in my accommodations.  Screw the orcs and their decorative spikes and limited color schemes!  I want LIGHTS!  I want A BARBEQUE GRILL BY MY TOWN HALL!  I want ACCIDENTAL EXPLOSIONS to keep things interesting!  I want a party to be going down in the Barracks!  I wanna dump that fetid, half-frozen pond at the back of my garrison and put in a heated swimming pool with pool ponies instead!  I want FANCY WALLPAPER with PENGUINS and BANANAS, and most of all, NO FREAKING SPIKES.  We got TECHNOLOGY to defend ourselves with, like explosive rocket chickens and murderous mecha-bunnies.  I don’t need to worry about Goren in the mines or crazed rylaks flying overhead if I got Shredders with flamethrowers, now do I?  NO, I DO NOT.

In other words, my ideal Garrison would be a CLASSY ESTABLISHMENT. 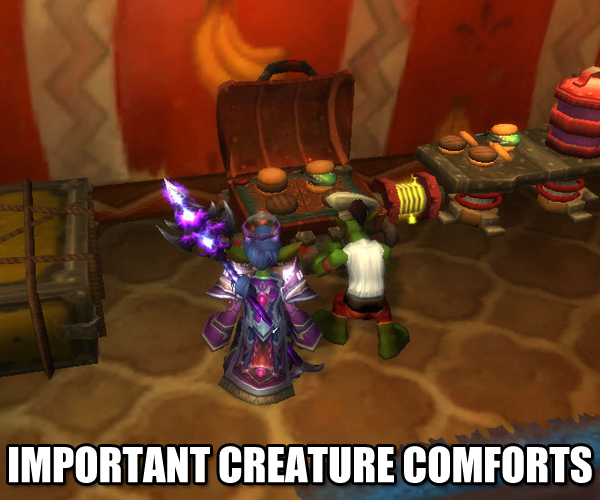 A Grill is an Important Creature Comfort
I don’t know how we’re supposed to live in Draenor without one.

The Reality
The reality looks like we took Orgrimmar and transplanted it into a snowy wasteland, minus my belovedly trashy and super-convenient former home, the Goblin Slums.  Mother truckers!  Also, the damn place was designed for tall people, even though we’ve got a goblin architect.

In Order to Begin Commanding
I need some assistance seeing what’s on this table.

Lumber Mill vs. Frostwall Inn
But let’s talk practical for a second here.  I originally intended to build the Frostwall Inn because I want more followers* (not that I’m trying to create an army or anything).  I ended up bowing to collective wisdom, however, and went with the lumber mill instead.  “Resources are good,” people would say, and I can agree with that.

There was a problem with this plan, though.  Namely, there weren’t any damned trees anywhere.

The lumber mill NPC told me Gorgrond was GREAT for trees, but it took a damn long while before I found the two required to complete the initial work order.  It turns out that we’re all competing for the same trees, and like real trees, they respawn rather slowly.  This meant that Gorgrond was clear-cut for all intents and purposes long before I got there, and it also meant that other people were HIGHLY COMPETITIVE when it came to what trees did exist.  Quite often I would arrive at a suitable piece of timber, only to find it being chopped down before my very eyes!  To add salt to the wound, I soon started finding large trees that I couldn’t do a thing with because of my dinky level one lumber mill.  The level three trees remained standing, both irritating me and making me feel somewhat relieved because apparently, nobody else could do a dang thing with them either.

At the end of the night, I basically said eff this sheeyit, and I built the dang Inn on top of of the lumber mill.

Goblins Everywhere!
Given enough time, I’m going to turn this into a goblin stronghold regardless of its style.  I’ve written down every goblin follower there is.

Penny Clobberbottom
A goblin after my own heart.

* Can I just say WTF RNG when it comes to followers?  Nioma’s first follower, Olin Umberhide, went all epically purple for no reason at all, and she got a slew of epic and rare followers thereafter.  And then there’s poor Bombelina, with a Garrison full of average green followers …

Nioma’s First Four Followers
I am not sheeyitting you, they were all rare/epic. Poor Bombelina’s people are practically all green.

I am about two steps shy of going OMFG I NEED A SERVER TRANSFER STAT.

Logically, I know that all issues will be resolved in due time.  Emotionally, it’s more like, OMFG AT THIS RATE I WILL NEVER BE ABLE TO PLAY MY MAIN AGAIN.  The longer I wait, the longer the queue gets.  IT’S LIKE BLACK MAGIC.

I’ve only been able to log in without waiting in a huge queue when it’s like, 3 a.m. in the morning.  THIS IS NOT A SUSTAINABLE HOUR FOR ME.

RAGE and FRUSTRATION and STUFF
ALL THE BAD FEELINGS, I HAVE THEM

[Edit: Tried to do a server transfer.  Got “Error: You have a character online for this account. Please make sure all characters are offline.”  I HAVEN’T EVEN BEEN ABLE TO LOG IN YET]

Being a little too eager to see the new content, I woke up early to send Bombelina through the Dark Portal.  I felt puzzled by Thrall’s premature baldness.  How had I not noticed it before?  Had his thick and luxuriant braids, their source hidden beneath a hood, convinced me that he had a full head of manly orc-hair?  As he and that random draenei dude barged through the portal like a couple of ninnies (look, I know you two are buff, but the Iron Horde’s got sheer numeric advantage on their side), I felt slightly betrayed by that whole adulthood thing.  I had to go to work at this critical moment.  “Just five more minutes …” I wanted to say.

END_OF_DOCUMENT_TOKEN_TO_BE_REPLACED

Thoughts: Technically, the helm and shoulders aren’t mogged yet, since she’s actually still wearing them, but that’s just between you and me.  I feel like the getup looks a little weird without the red cloak I had in mind, but I can’t mog the legendary cape, so that’ll just have to wait as well.  This set is one of two outfits I have planned for Bombelina to wear while blasting her way through WoD.

I’m tempted to ditch the Cannonball-Dented Shield and go for my old standby favorite, Gizlock’s Hypertech Buckler (it’s one of the gear-like shields that moves but doesn’t require engineering).

On another note, I am now regretting not getting and/or destroying some of those toys to save on space …

The simple act of punching some poor mob in the face has a long and storied history in Azeroth, starting way back when in the dark ages known as Vanilla.  People of that era felt compelled to level up their skill in unarmed combat.  It seems strange to us now, but life in those days was rough, and you never knew when you might have to smash in someone’s schnozz.  More recently, this “punch the @#$%er in the face!” fighting technique has resurfaced for those who vastly outlevel the quest content they happen to be doing.  Why, my buddy Kash was in that very situation the other night!  Her character was buff beyond belief in comparison to the zone’s monsters, so in order to finish up the quest chain for a transmog item she wanted, she had to remove her weapon and strip all her gear.

LFR was being unusually docile* that evening, which left me with some extra time on my hands.  I had an idea.  It was not just a plain old idea, oh no – it was a freaking brilliant idea, and I lost no time sharing it.  “Let’s go punch our way through all the old raids ever,” I said.  Kash agreed that this was a genius time-wasting concept, so I set about creating a raid group devoted to naked fisticuffs with old school bosses.  I spent ages cajoling, demanding and insisting with virtually everybody on my friends list, but weirdly, nobody else wanted to come.  (Seriously, guys, where are your priorities!?)

Punchathon in Tempest Keep
I just don’t know why there are so few of us willing to do this kinda sheeyit out there.

So in the end, it was just Kash and me.  We had ambitious plans when we first started, which included taking on everything BC, battering all things Lich King, and ultimately ending up KO’ing Deathwing, all with our puny fists.  As you’ve probably guessed, we badly underestimated the amount of time it takes for two people to punch trash and raid bosses to death. 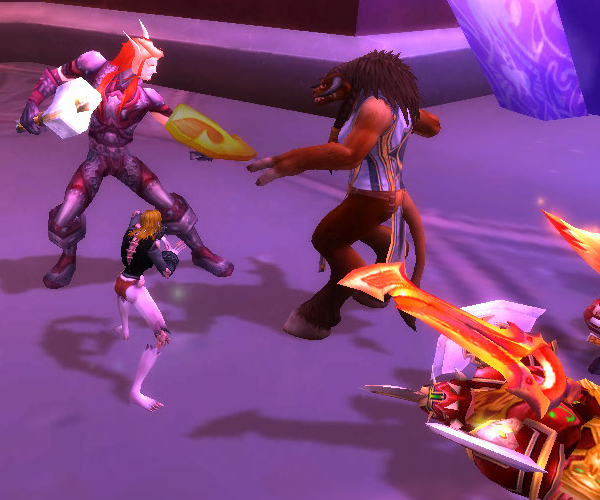 We decided on a “no skills whatsoever” rule, so I brought Alexalis, assuming that as a Mistweaver monk, her punchy-healy goodness would keep our tiny party alive without anybody actually having to use healing abilities.  Kash was smart, and brought a tabard with her.  I didn’t think that far ahead, but I did have a shirt on by accident!  (I forgot Alexalis even had one …)

Punchathon in Tempest Keep
Come at me!

We started off with Tempest Keep.  All seemed well at first, and we made it through the trash easily (if slowly) just by swinging our fists.  But then we started down the slippery slope of skill usage with Al’ar, who kept flying away.  Movement abilities were okay, we decreed, just not fighty-fighty abilities.  Unfortunately for us, old content still has berserk timers, and we went way past that limit.  Unfortunately for Al’ar, he couldn’t put much of a dent in us, even when he was berserked.  Still, it took so damn long, we concluded that fighty-fighty abilities were okay, as long as you weren’t using a weapon. 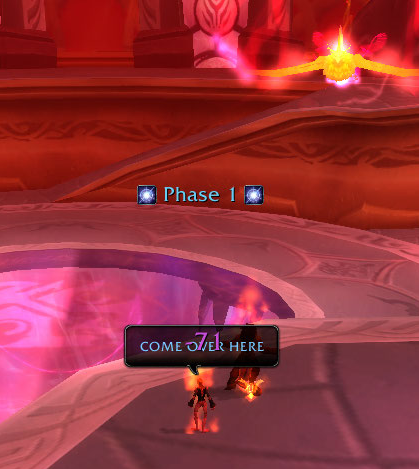 Punchathon in Tempest Keep
I mean seriously, can’t he just stay over here and get punched to death like a respectable raid boss?

Goa then made the mistake of logging in, and in short order I dragged him into the Keep in time to face off against the Void Reaver.

We’d forgotten that Goa, being a warrior, couldn’t use any skills whatsoever without weapons, and that just didn’t seem fair somehow.  We let him use his weapons after that, mostly so he could press some buttons, but also because it sped things up a good deal.  It’s not that we couldn’t punch everything to death, but more that the punching-only rule was sucking up more time than we had to waste – dinnertime was coming upon us fast.  We skipped Solarian or whatever her name is, and went directly to the top, getting into a fist (and dual mace) fight with Kael’thas.  We eventually managed to take him out – and promptly forgot to take a good picture. 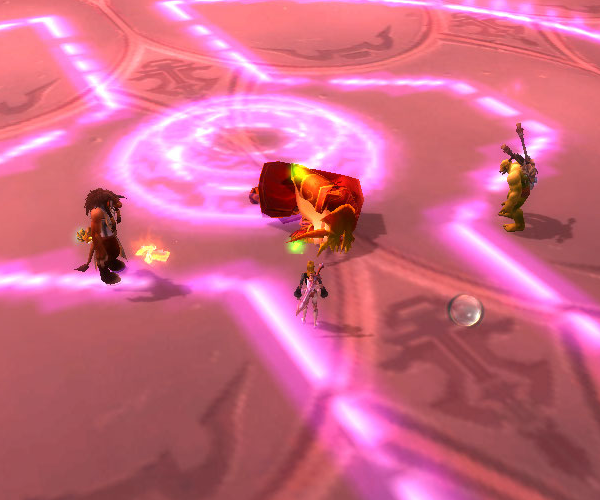 Punchathon in Tempest Keep
It turns out that if you run in circles around Kael-ol-buddy here, he’ll shuffle around so fast he knocks himself out. (Sorta.)

*So we came to the Spoils fight, and as usual, people started talking to the damned box and starting the fight even though groups hadn’t been split up yet.  Irritated, I told ’em, “don’t start it up yet, ya derps,” and they stopped.  Weirder yet, nobody objected to being called a “derp.”  Even stranger still, nobody insulted me, my momma and my DPS for telling them what to do.