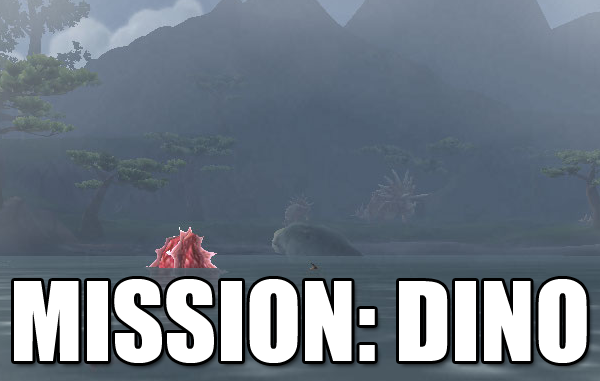 MISSION: DINO
There will be Direhorns.

Well, that’s not exactly true.  Thermalix had the white Devilsaur from Un’goro Crater for a while back in the day, but they parted ways some time ago when Therm had to clear out some stable space for a monkey in a fez.  These days, Therm wanted one of those scarlet Direhorns, bigger than a Cadillac and redder than hell.  While they don’t come with all the bells and whistles any good goblin expects, Therm’s an engineer – she can handle that.

In any case, I’m getting ahead of myself.  Let’s return to the beginning of the 5.2 patch.

Thermalix’s first priority was obtaining the farm.  This was much easier than she had anticipated.  Given the amount of work involved in opening the place up to its full potential, she was expecting it to be handed over for only the most thankless of tasks.  Say, something like having to wine and dine all the Tillers all over again, or maybe offering bribes of hard-to-obtain items that ONLY drop from mushans which have been exposed to the Sha of Anger for five seconds or less, or even offing Yoon by orchestrating a mysterious Exploding Master Plow accident (much as she liked the panda, if he’s gotta go, he’s gotta go).  Farms are serious business, guys.  And plows OBVIOUSLY blow up all the time!  Everybody knows plow fatalities are common.  Fortunately for Yoon, however, Therm’s worries were unfounded.  Dude just walked off.

Or maybe not, but a supply of carrots is.

Farm For The Horde
I can plant four things at once now! World of Harvest Mooncraft, amirite?

Now, back to the thundar and dinos.

Thermalix arrived on the Isle of Thunder to find Lorthie* and the Sunreavers in need of assistance.  While they’re strong enough to create fancy magic invisibility domes that you can’t ride any type of mount in (this seems like an oversight somehow), they were having a problem with Mogu.  And dead things.  And trolls.  And Saurok.  You’d think we were having problems with EVERYTHING on this dang island … oh wait, actually, yeah, we are.

Invisibility
Nothing to see here.

Let me summarize this island for you: Blah blah blah dailies.  Also, lightning.

Now that we’re done with that useful and insightful description, it’s DINOTIME!  To the  Isle of Giants!

As it turns out, you need a fancy tome of learnin’ to know how to tame Direhorn-type dinos, even though you were totally able to tame Devilsaur-type dinos back in Un’goro Crater without having to get your Masters degree in Huntering.  While I say a dino is a dino, Blizzard either wanted to make some form of awesomesaur available to every hunter spec, or they simply wanted to use the word “Dinomancy.”

After careful CCing because OWW OMG WTF (apparently you aren’t supposed to fight the Dinomancers alone),  I was victorious.  It certainly helped that while Dinomancers do heal THEMSELVES, they don’t heal EACH OTHER.  Still, I don’t know how long it took, nor how many Dinomancers fell to my bow, mostly because I was too busy trying to grab some dang Dinomancers for myself.  There was a surprising amount of competition!  [Edit: It also helps not to pull all the dinosaurs ever, just sayin’.]

Truly, he is a magnificent creature.

Do you ever feel small and insignificant?
Enormous, as any awesomesaur ought to be.

* I’ve got some campaign slogans for him!