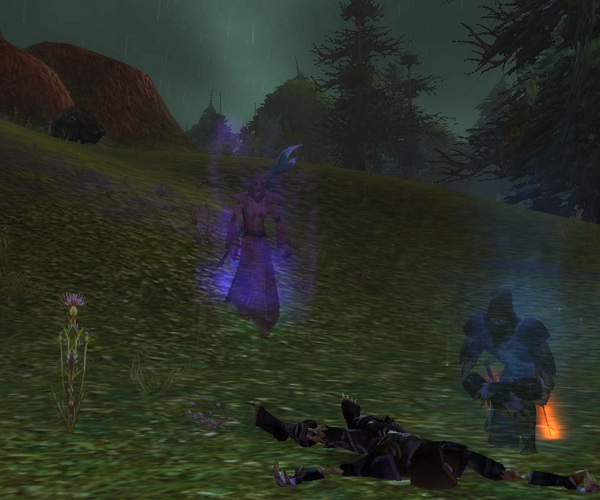 Thanks to rigorous scientific testing, I have established that 10 out of 10 Ailabeths love to float, while conversely, 10 out of 10 Calivernes can’t stand the damn buff don’t you Float me DAMMIT BETH.

Seriously, floating makes everything twice as awesome.  It’s so awesome I had to use the glyph that removes the reagent requirement so I could float everywhere – cities, dungeons, over water, you name it.  The hunched over Forsaken pose works very, very well with Float and ups the creepiness factor significantly.  She becomes some sort of shadow wraith/spectre/ghost, haunting Caliverne with the possibility of casting Float upon him. 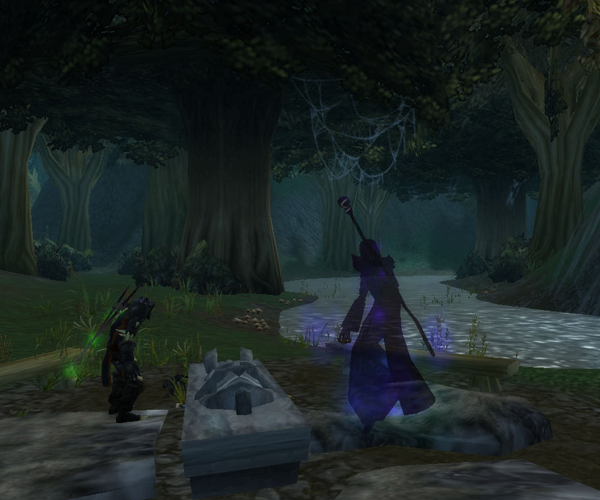 Caliverne and I were hanging around Duskwood looking for rares.  We were studying the off-the-beaten-path gravesite of The Unknown Soldier when two level 85 night elves – one druid and one rogue – showed up.  Now, Caliverne PVPs, but being backed up by Ailabeth is more a handicap than anything else, as she was level 50 or so and Does.  Not.  PVP.  Therefore, we ran like hell.

I Need a Damn Translator
(I hope it’s something other than “DIE YOU MOTHERTRUCKERS.”)

There isn’t a translator out there (there’s one where you pick “phrases,” but that obviously isn’t going to work), so I’m left to my own devices to figure out what the rogue said.  My guess: “Yikes!  They look like they crawled out of there yesterday.”  I may be paraphrasing slightly.

We also found The Carved One.  We then decided to chill in some crypts, because that’s what Forsaken do.

So Many Sparkles
We’re so Forsaken, we hang around in crypts for fun.

One last floating shot.  I can’t help myself.

LOLOMGWTF
Wut haz teh intarwebs dun to me?

I keep trying to write something semi-intelligent, but it just isn’t working out that way.  So, MOR PIKTURS!

Am I the only one who thinks it’s weird to see an Alliance barbershop displaying hairdos of male goblins?  Could it be that the items within a barbershop are goblin technology, and in exchange for using said gizmos, Alliance barbershops are contractually obliged to display goblin imagery!?  Or is it just that we’re all vain, whether we’re tall or short, green or not?

Niremere met her first rare the other day.  Sadly, since she’s a paladink, there were only two options: kill it, or kill it.  I briefly thought about having Thermalix hike out there to tame it, but she’s already tamed Ghost Howl, who shares the same model and skin.

We’ve Run This One Too Many Times

All I have to say about this is: a;sljkfas;ldkjfa;slkfjas;dflj