Blue, blue caravan
Winding down to the valley of lights

My true love is a man
Who would hold me for ten thousand nights
In the wild, wild wailing of wind
He’s a house ‘neath a soft yellow moon

So blue, blue caravan
Won’t you carry me down to him soon

Blue, blue caravan
Won’t you drive away all of these tears
For my true love is a man
That I haven’t seen in years

He said,
“Go where you have to,
For I belong to you until my dying day”

So like a fool, blue caravan, I believed him
And I walked away

Oh, my blue, blue caravan
The highway is my great wall

Oh, he was a beautiful fiction
I invented to keep out the cold
But now, my blue, blue caravan
I can feel my heart growing old 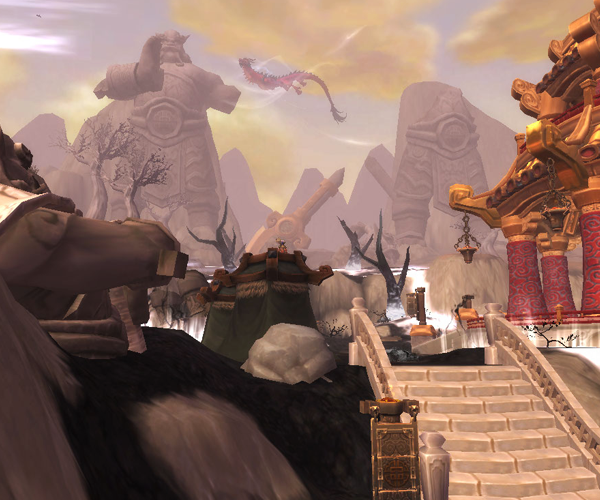 Oh, my blue, blue caravan
I can feel my heart growing old

You know that glyph where your party members can use your Stag form as a mount?  Daschela somewhat regrets letting Fel buy her that.  SHE STILL HAS HER DIGNITY, DAMMIT!

I also had an unexpected conundrum in a LFD group.  I queued Daschela up as a healer, only to find that our tank was named something terrible!

Speaking of Dungeon Finder, Alexalis was chatting with her party members on the challenges faced by Forsaken monks – specifically, how your toes might fall off when performing Spinning Crane Kick.  Then this conversation came about: 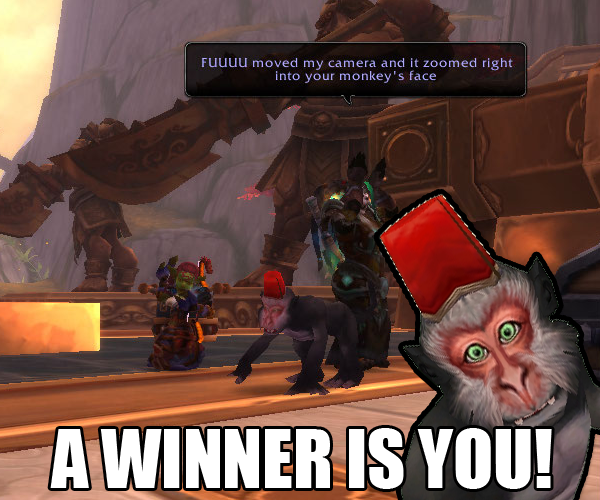 A Winner Is You!
That’s right, Carmen doesn’t blink.

From what I hear, the latest blogging topic is faux pas, those events/actions/etc. that are otherwise known as moments of glory in a most ironic way.  This sort of thing is my life.

Faux Pas #1: Staying Together is for Wimps 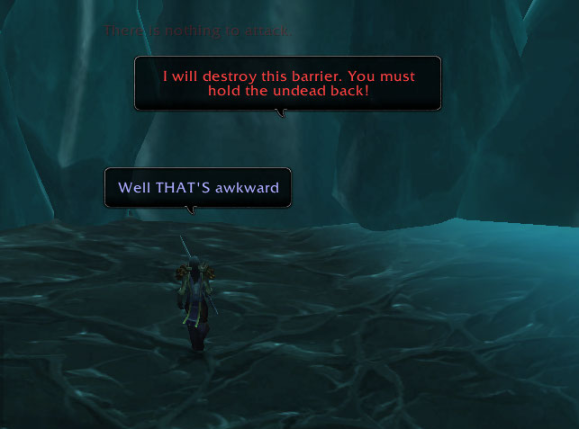 Well, That’s Awkward
Jaina, Healer, Tank and THE LICH KING OMG on one side.
All three DPS? On the other.

Faux Pas #2: THE MORE YOU SHOUT IT THE MORE EFFECTIVE IT IS

Awkward Strand of the Ancients Strategy is Awkward

Faux Pas #3: Assuming the Other Person Can Handle It 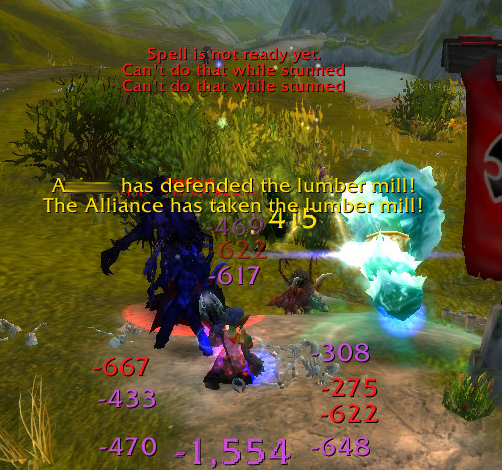 Alone on the Farm
Yes, leave the inexperienced mage by herself. 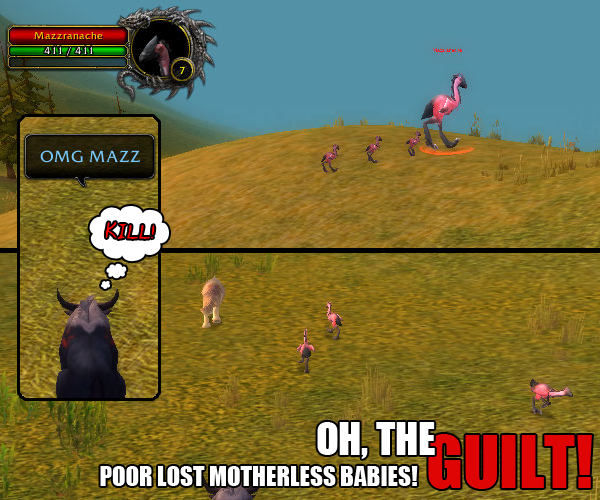 The Story of Mazz
I expected her kids to magically despawn or something.
WRONG! They ran around guilt tripping me.

Um, Ow
I’m not sure the orc saw THAT coming.

Faux Pas #6: Talking to Strangers About Your Family

We Literally DIAF
Sometimes, it’s better not to know.

Faux Pas #7: It’s on Cooldown, But We Won’t Need it Anyway

Cooldown LOLZ
It’s all about the timing.

Dae Saves the Day! Kinda!
Warlocks have all the luck.

Ailabeth has just started Cata heroics, and, like most others in that position, is rather … undergeared.

Goblin Starting Zone is the best!
Bite me, Valley of Trials!

I think I said a while back that I wasn’t going to post any of the ideas you have when you drink Kaja-cola.  I changed my mind!

The Hidden Side of Silvermoon
Apparently, only RPers know of this.

Did you know that the Tailoring shop in Silvermoon City runs on leper gnome labor?  This guy’s minion even goes around whipping them (although one of them doesn’t seem to care, he always goes back to sleep).  Do you think leper gnomes are still sane enough to care?  If not, I need to get some for my Rocket Camel assembly line.

None of my goblins understand why any self-respecting, profit-inclined sentient being would ally his/her/itself with the black dragonflight or anything Twilighty.  There isn’t a whole lot of gold in the end of the world, people, because the gold will cease to exist!  There’s probably lots to be made in extending the end of the world, but the black dragonflight isn’t exactly into that.  Besides, they’ll just kill you and take your money anyway.  (Plus, working conditions almost always suck, because they have a thing for fire.)

Unfortunately, none of the goblins in Blackwing Lair seemed interested, so Therm, Caliverne and Shao gave them another reason why allying with crazydestructive dragons is a bad idea: people who aren’t aligned with said creatures will kill you.  Either way, you end up broke and dead.

Map Quest /punny!
If you ignore the large statue,
I like the fountain.

While Niremere has absolutely no problem with a stone-faced Varian Wrynn staring at everything forever, I am personally not so fond of that part.  But if you subtract that, the fountain is a very nice place to be.  I also like the vaulted ceilings in the  Keep: 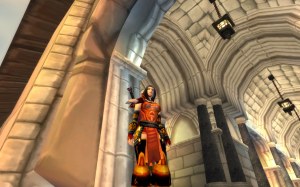 Vaulted Ceiling
Yes, I look at this sort of stuff.

Architecture!  Excuse me while I sit here and ponder whether those ornamental columns are marble or whatever the Azerothian equivalent is.  Back Horde-side, Thermalix has toyed with the idea of stealing the flames from Alliance capital cities:

They will NEVER see me coming.
Ok, once they killed the mage, they did.

So far, all she’s done is follow one mage into Exodar, then high-tail it out of there on a camel when said mage made too many friends and bit the dust.  I expect she did not die because the sight of a goblin on a camel was probably a bit much for the Exodar NPCs.  You have to stop laughing before you can aim! 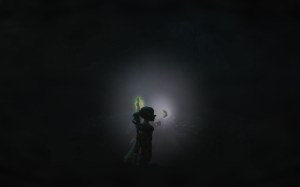 Light in the Darkness
/dramatic

See, goblins can be serious!

Fraternizing with the Enemy
All’s Fair in Booty Bay

While looking for iron ore on Niremere, I ran into Caliverne.  We /emoted each other into the Salty tavern and had a drink.  What?  What happens in Booty Bay stays in Booty Bay!  (Or so the advertising campaign says, anyway.)

Be British, Boys
I mean, be blood elfish?

Best conversations of the week.

Mind Wipe
Alexstrasza is full of it.

DS LOVE AND LOBSTER
Never underestimate the power of seafood.

We were having a lot of trouble hitting the button that day.  And yes, when it became clear we were going to wipe, I jumped.  Sadly, the temple gets wider about halfway down, so I didn’t make it all the way to the ground.

The Story of My Life
The best laid plans of goblins and mammoths oft go awry. 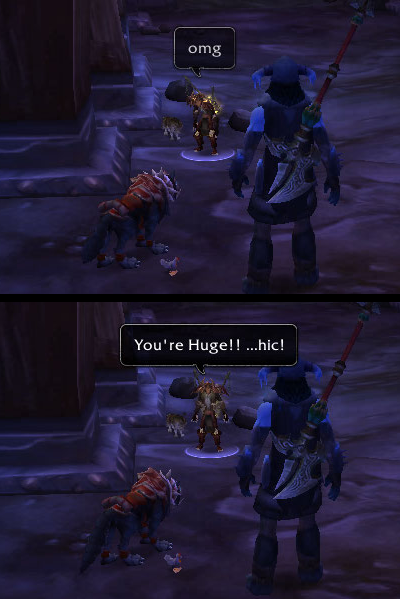 Caliverne Isn’t Sure How He Feels About This
Normally Thermalix is half his size.

Mysterious Floating Vrykul
She doesn’t do this Drakkensyrd harpoon crap.

How to Survive in Heroics, Part 1

How to Survive in Heroics, Part 2
Just an FYI

Not So Heroic Leap
As they say, it’s not the fall that kills you.
It’s the sudden impact at the end.

Nothing Makes Sense
But then, why should it?

Well That’s Awkward
You can tell he wants to bite Verse.

Verse and Gambachi
If only I had known how to turn off nameplates at the time.

And that’s it.  I’ve saved some others and deleted the ones I don’t need.  My screenshots folder is a blank slate.  Perhaps Mechalis should release screenshot albums on a quarterly basis? 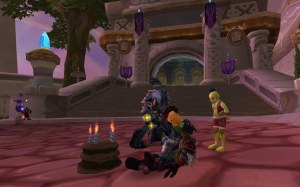 Bad Example
Is the “bad example” the eating of cake, or the not sharing of it? 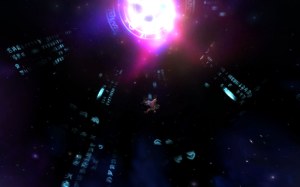 Don’t Jump Off Your Dragon
Mechalis jumped off her dragon in the middle of battle.
That was a problem.

Size Disparity
Even though Mechalis is wearing a disguise that makes her huge, Mr. Chicken stays the same.

Bunnehs can ride!
Dreadly helps Mech get the “Hard Boiled” achievement.
It didn’t occur to anyone to go to Un’goro and then use the damn branch.

One Last Dance
After this, Majig ditched the staff and picked up some swords. 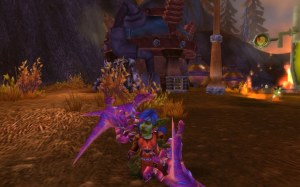 Why, God, Why?
What did Centina ever do to you?
Why are baby raptors trying to eat her face?

Sandbox Tigers
Mechalis looks so happy to have found these.

Just a Moment
Really, they blend in so well.

Dramatically Dead
And soon to be literally so. 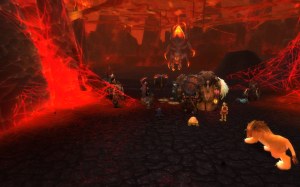